© 2013 Norman Rozeff
10/29/18 Returning home for his brother Gordon's funeral, Lon C. Hill, Jr. lands the first airplane ever in Harlingen. The light bi-wing aircraft puts down in a football field close to where the present Harlingen airport exists. In his trip from San Antonio he has refueled at the King Ranch and approaching Harlingen looks for sheets spread along side the grass field selected for his landing. 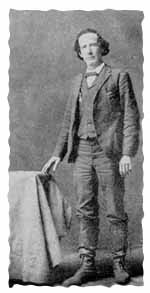 1923 The first locally owned plane is brought to town. Leman Nelson and Clay Rader have purchased a surplus WWI bi-plane, still in its crate. They purchase an engine for it bringing the total cost to $600. Later it is destroyed by high winds. In time Leman Nelson and Bill Williams open a flying school. Two students plan to hi-jack the plane to Central America. With Nelson in the front cockpit, the student shots him while airborne, intending to dump the body in the Gulf, land, and pick up his accomplice. Instead the novice crashes between Harlingen and San Benito. As rescuers move to the plane he commits suicide.
The site of the municipal airport is a 72 acre triangular piece of land wedged between the Arroyo Colorado on its east and the Main Canal on its west side. It is at the south end of the municipal golf course. It possesses a gravel-dirt airstrip.
6/29 The Harlingen Star on its editorial page daily promotes among others the following for the city and area: A Modern, Fully Equipped Airport.
11/29 Harlingen boosts that its airport was the first in the Valley to be rated by the Department of Commerce. In May after a committee was appointed to find a new 400 acre site for a city airport, it begins to draw up plans to enlarge and modernize the existing facility and equipment. Mid-year efforts to entice Pan American Airlines here from Brownsville had fallen on deaf ears despite occasional flooding of the Brownsville strip.
1930-34 A Valley resident since 1930, C.W. Blackwell has a flying school in the area. Mr. and Mrs. O.N. Joyner's daughter Evelyn is one of his students and is considered to be the youngest woman pilot in the country. After she earns a flying license, her father purchases a plane. Blackwell makes most of his living with his pioneer agricultural dusting service and will manager the old Harlingen Airport for a number of years. At age 67 on 5/15/59 Blackwell passes.
3/41 Army Air Corps officials in Washington announce approval of Harlingen Air Training Base and in May this is confirmed. Later authority to proceed comes with the approval of a $3.8 million appropriation. 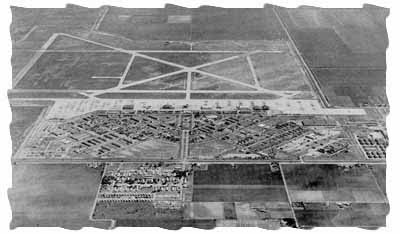 7/41 Harlingen Army Airfield is established for the training of gunnery students.
By 1945 more than 48,000 gunners have utilized the facility, now the Valley International Airport. With its palm-lined streets and flowering shrubs it was known as the "showplace of the air force."
11/28/41 Col. John R. Morgan, who will become the airfield commander, lands first base aircraft, a BT-13, on new southeast runway. At this time only a one-chair contractor's shack exists.
1/43 The 72 acre municipal air field is leased to an individual concern. 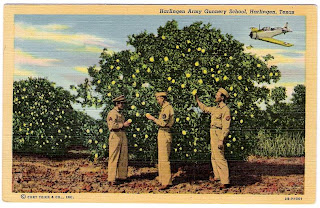 1/5/46 The first hint of the closure of the Harlingen Army Air Field comes in an AP story noting it will be declared surplus, the last of four such bases in this area to be deactivated. Others have been Moore Field, the Brownsville Army Air Base, and the Laguna Madre Sub-Base of the HAAF. Col. Louis R. Hughes is commanding officer of the 5,000 men, both trainees and permanent personnel, now here. By 1/29 negotiations start on the use of HAAF. On 2/1 the base is placed into inactive status and four days later declared surplus property. HAAF base commanding officer Col. Roy T. Wright had received orders on 9/17 to go overseas. Col. Lewis R. Hughes, deputy CO as of 4/13, then took command of the base. On 10/5/45 Col. John R. Morgan, commanding officer of the 79th Flying Training Wing with headquarters at HAAF, had been ordered to assume command at Keesler Field, Mississippi. He had been here since 1941.
In 1946 E.O. Young establishes the Young Flying service. It is purchased by Wayne French in 1979. By 1985 it is a full, fixed base operation handling fueling, and on-call maintenance of smaller aircraft, air charters, sale of new Piper and Cessna airplanes, and rentals. Its 43 employees have a payroll of $437,000 by 1984.
2/46 Harlingen Army Airfield is deactivated and formally taken over by the city on March 21. On 3/21/46 the field is taken over by the city.
9/7/46 Harlingen Field dedicated as a municipal airport by Rear Admiral C.A.F. Sprague, commander of the Corpus Christi Naval Air Station. From this field is flown the first air cargo ever from the Valley. It is a planeload of strawberries for Canada. From 1947 to 1951 when it is reclaimed by the military the airport is called the All-Valley Regional Airport.
4/22/47 Nationwide Air Transport flies into the All-Valley Airport, Harlingen with the its first international air cargo ever. The DC 3 carries 7,000 lbs. of shrimp from Carmen, Mexico.
1947-48 Trans Texas Airways, with its 21 passenger DC 3s, offers twice daily flights.
The city is advertised as the "Valley's Commercial, Industrial and Transportation Center."
3/2/48 Trans Texas Airways has its first flight between Harlingen and San Antonio.
1949 Merle Huston is manager of the Harlingen All-Valley Airport.
1949 Val Air lines headquartered in the Madison Hotel building operates two flights daily to San Antonio and return to Harlingen.