A Short History of the Beginnings of U. S. Navy Radio Communications and the United States Navy Point Isabel Wireless Station


The Navy's Role in Early Radio Development and Its Use

© 2013 Norman Rozeff
American military communications as a separate discipline began with Confederate forces in 1862 and the Union Signal Corps was to form in 1863. Innovations were to follow as methods advanced from flag and torch signaling to telegraph and numerous other inventive schemes.
Few know of the important role that the United States Navy played in the development and perfection of long-range radio communications at the turn of the 20th century. Still fewer remember or are acquainted with the Navy wireless transmission facility which once existed in the southwest portion of Port Isabel. How and why this station came to exist will be explained here. Its evolutionary background was definitively addressed by Captain Linwood S. Howeth in his 1963 book History of Communication-Electronics in the United States Navy, U. S. Government Printing Office. What immediately follows are extracts and paraphrases from his comprehensive study.
The first electrical use in communications in the U.S. Navy was that of electrical signaling lights in 1875. It was the Spanish –American War which brought forth the establishment of coast signal stations. By April 1898, 230 land stations along the coasts of the country were tied together with telegraph and telephones and used various physical systems to communicate to ships off-shore. These stations, primarily lighthouse and weather service facilities, were manned by Navy personnel. The operation was termed the Coastal Signal System.
The system which we now call radio consists of the sending of electromagnetic waves created by a generator and received by a conductor connected to a suitable receiving circuit. Michael Faraday and James Clerk Maxwell had laid the scientific groundwork for electromagnetism in the mid-19th century. While others were to build upon their work such as Dr. Mahlon Loomis as early as 1872 to be followed by Amos Dolbear in 1882 and Phelps and Edison in 1885, it was Heinrich Hertz, before his death in 1884, that developed an oscillator for generating high-frequency electro-magnetic waves, essentially the first radio transmitter.
Recognizing the fact that it would be of great use to the service, U.S. Navy Lt. Bradley A. Fiske researched and experimented with wireless communications in the decade following 1885. His work therefore preceded that of Marchese Marconi. Marconi was less an inventor than an individual who could develop engineering and applied research. This in the 1890s he did, accumulating information on radio signaling from numerous individuals, including Prof. Popoff in Russia. The outcome was by July 1898 the steamer Flying Huntress became the first ship outfitted with radio for commercial purposes.
In early 1899 several dramatic incidents related to maritime safety and the use of radios accelerated their installation. That year the Royal Navy commenced testing aboard three of its ships. By 1900 it had installed radio equipment in 26 ships and coast stations.
In September 1899 the U. S. Navy authorized personnel to observe radio communications monitoring the America Cup Races. In November this generated a favorable report to the Secretary of the Navy. The Navy in fact had by October 1899 been conducting its own tests on non-Marconi equipment but experienced interference problems. However a report recommended further testing and the establishment of a station at Newport, Rhode Island. 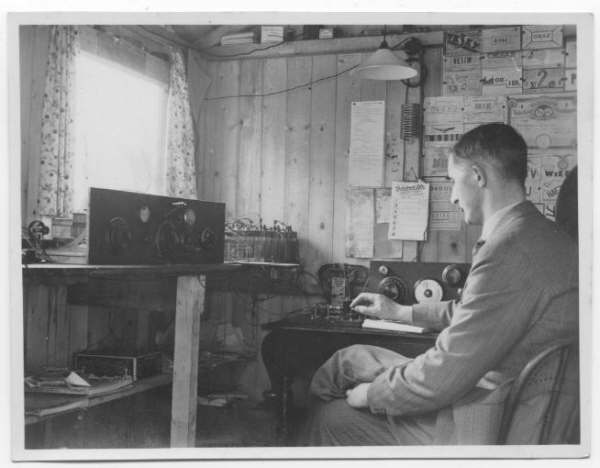 In 1901 the Navy was operating in a more observatory mood rather than experimenting. However, some personnel were assigned to Europe to acquaint themselves with the operation of radios. In 1902 no decision was made on the purchase of Marconi equipment though it was deemed superior to that of the Germans. Still prior to the end of the year, six different manufacturers were ready for comparative tests.
By January 1902 the Navy was issuing instructions that ships masts be prepared to accommodate antennas. Ships under construction were required to be provided with masts suitable for use of radiotelegraph apparatus.
Shore radio stations by May 1902 were to be located at five East Coast lighthouse stations and one near San Francisco.
Training operators was slow to be implemented and when in 1903 13 students were assigned to a school at the Brooklyn Navy Yard, the number was far less than that required.
In 1903 seven manufactured systems were tested aboard two warships, the USS Topeka and USS Prairie. Reception distances ranged up to 62 miles for Slaby-Arco (Germany) to only 13 nautical miles for Rochefort. Lack of equipment and trained operators hindered the testing. By September the Navy had acquired 37 Slaby-Arco devices and 18 by other manufacturers. Naturally American manufacturers began to complain about the purchases from the German outfit.
In this period individual naval squadrons were more or less autonomous. This type of organization was a deterrent to early rapid development of naval radio communications. Additional transmitter stations were set up in 1903, two along the northeast coast, one in Puerto Rico, and two in the Philippines. Lack of trained personnel had only five stations manned by summer 1903. By the summer exercises of 1903, seven warships were equipped with radios, this being the Navy's first strategic use of them. "Old Navy" had reactionary views of this new technology and the issue was heatedly debated.
The efforts of the Marconi interests to establish a wireless monopoly and the shady dealings of the De Forest Co. lead the Navy to ask that the Government have absolute control of wireless stations in "time of national peril." An international conference on the subject of radio was held in Berlin in August 1903. No protocol was agreed upon by the attending nations.
An Interdepartmental Board appointed by President Theodore Roosevelt submitted to him in July 1904 a report recommending that the Navy be designated to provide coastwise radio communications for the U. S. Government and when not in competition with commercial stations to receive and transmit all radio messages to and from ships at sea. It would also empower the Army to erect stations and sought legislation to prevent radio telegraphy by monopolies or trusts. Vested interests kept these proposals from going to Congress.
In 1904 the Navy contracted with the American De Forest Radio Co. to provide and install three 35 kw transmitters and receiving equipment and accessories. These would be used to signal the Canal Zone and Guantanamo Bay, Cuba from Key West, Florida. These were completed in late 1905 and for the latter in early 1906. At each location three masts of 208' each were set in a 300' triangular arrangement. In 1906 the Navy was reporting it had 60 transmitters furnished by eight manufacturers. Ranging from1 to 35 kw in power they averaged 7 kw.
Early Navy radio had two components. One was the shore radio system under the individual commandants of the Shore Establishment Notice to Mariners. Fifty ships provided weather data for this system. Naval time was also transmitted. Atmospheric disturbances continued to plague transmissions from still rather primitive equipment.
The second system was fleet radio. It often lacked discipline and unified protocols. One success story of fleet radio was however during the San Francisco earthquake of April 1906. The USS Chicago moved into the area was able to provide valuable transmissions after other sources were disrupted. 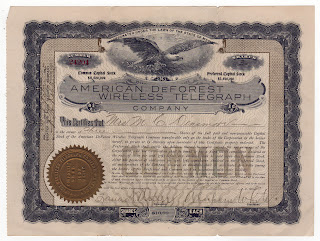 In May 1906 a second International Radio Telegraphic Conference was held in Berlin. After considerable debate from delegates of 27 nations, a protocol, to be effected July 1, 1908, was adopted. It stipulated that any brands of radio equipment could be used to send and receive radio message, that inter-ship communications would be instituted, that radio stations would give priority to distress calls, and that all would work toward the elimination of interference between stations.
In this period the U. S. radio industry was in perpetual disarray with conflicting claims, patents, inventions, etc. In 1907 Lee De forest joined with James Dunlop Smith, a star salesman, and Samuel Darby, an honest patent attorney. They formed the De Forest Radio Telephone Co. One of its first customers of its radiotelephone was the Navy which in 1906 had purchased 26 of them. These were improperly utilized and for this reason proved a failure.
Reginald Fessenden of the National Electric Signaling Co. worked on continuous wave reception in the first decade of the 20th century. He would not succeed until De Forest developed equipment to satisfactorily generate local oscillations. Fessenden won a Navy contract in late 1908 for 100 kw transmitters capable of signals across arrange of 3,000 miles. These never met specifications. The company did sell the Navy 50 sets of other transmitters over the next two years.
It was the Poulsen system of continuous undamped oscillation and California scientists/entrepreneurs at the Federal Telegraph co. that provided the Navy reliable 35 kw transmitters. This company was eventually purchased by the Navy during World War I.
With the U. S. Senate still being appointed by sate legislatures prior to the passage of the 17th Amendment, many felt that the majority of Senators was under the influence of big business hence opposed to Government control of radio.
An July 1909 collision of two passenger ships SW of Nantucket greatly influenced public opinion. About 1, 650 persons were saved and only six reported lost due to radio messages received on shore and relayed requesting rescue efforts by two vessels in the area.
Finally becoming effective 1 July 1911 was the Radio Ship Act of 1910. It mandated provisions for radios in vessels carrying over 50 passengers on the high seas.
After many a year, in 1909 Democrats gained control of the house. This led to the ratification of the 1912 Berlin Wireless Telegraph Treaty. Congress then finally authorized Government control of radio in 1912. It was the sinking of the Titanic in April 1912 which soon brought needed amendments resulting in the Radio Act of 1916.
Although Navy line officers were frequently reactionary in regards using radio for tactical purposes, they were eased into its use. In the summer of 1911 the Navy used its first radio plan. It was a fairly simple one.
Undamped waves, as emitted by an arc transmitter, were a breakthrough for long-distance transmissions and were nicknamed "the Navy darling." To go along with this in 9/12 a transmitter frequency changer had been perfected. An enthusiastic Navy asked Congress for a $1 million appropriation for construction of high-powered radio stations in the Canal Zone, California, Hawaii, Samoa, Guam, and the Philippines. It was approved and later raised to $1.5 million.
The end of 1912 saw the organization of the Office of Superintendent Naval Radio Services. This would be a major step for technical control and training. On 12 May 1913 the Navy Department issued the "Battle Signal Book of the United Sates Navy, 1913". This was a "strictly confidential" radio codebook.
When President Woodrow Wilson sent ordered troops to Veracruz, Mexico on 4/21/14 radio communications proved inadequate. Finally a warship had to be stationed at Tampico in order to receive messages via the station at Key West.
Prior to WWI an accelerated period of radio improvements occurred with both private and Navy scientists contributing. Receivers, amplifiers, vacuum tubes, and condensers were upgraded in performance.
In the Navy Act of August 1916 Congress authorized a $600 million program for the construction of ten battleships, six battle cruisers, and 140 more naval vessels during the next three years.

The Establishment of the Point Isabel Wireless Station
With the opening of the Panama Canal in August 1914 adequate communications between Washington and the Canal Zone became pressing, especially if war was to ensue.
In preparing for the possible U. S. entrance into the Great War additional stations were constructed. The Navy Communication Service set up the Point Isabel Navy Wireless Station within the Eighth District having New Orleans as District Center. This district also operated stations in Pensacola, Florida and the Heald Bank (Texas) Lightship. 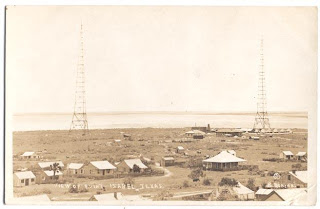